About Constellations for futures 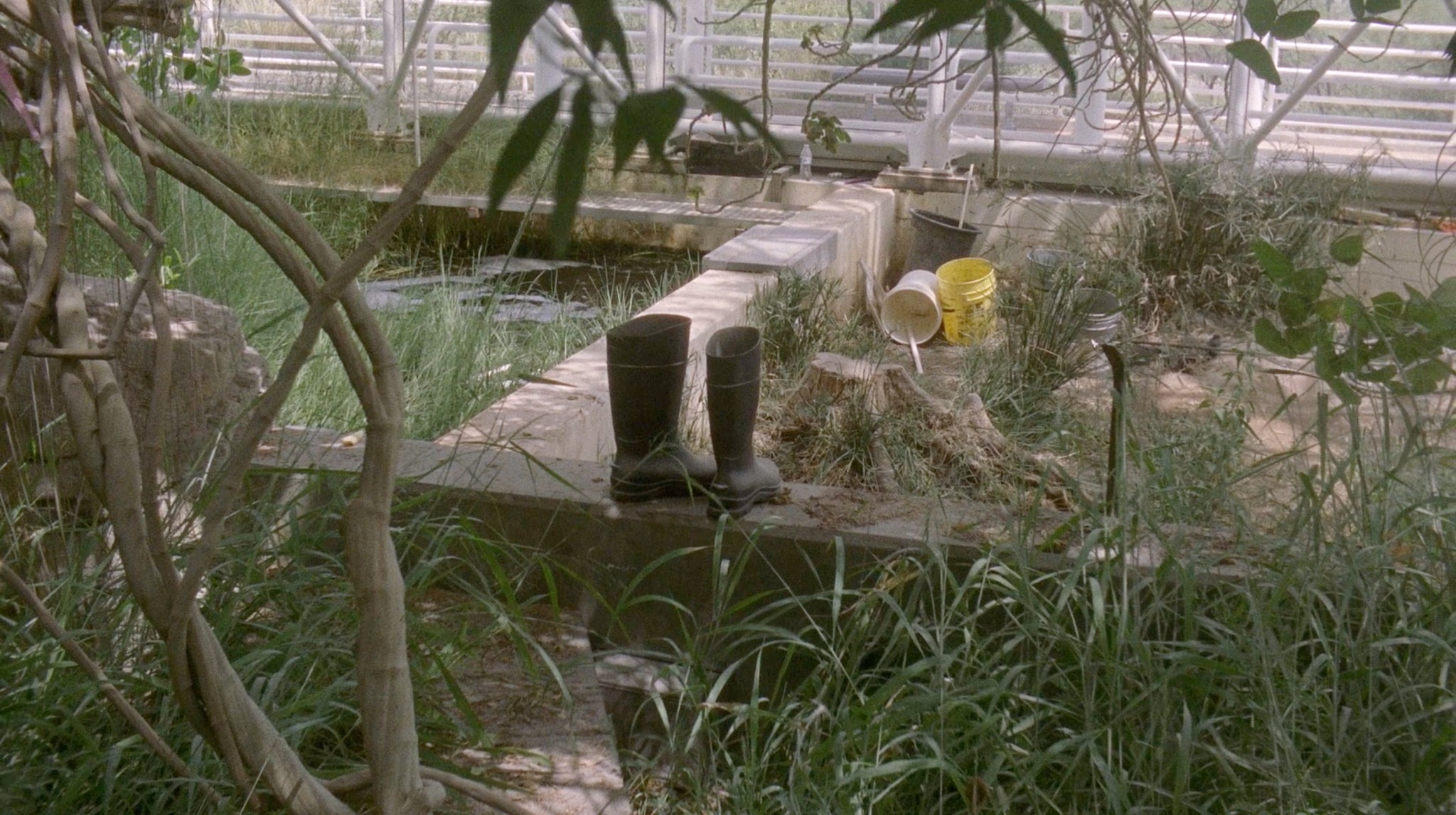 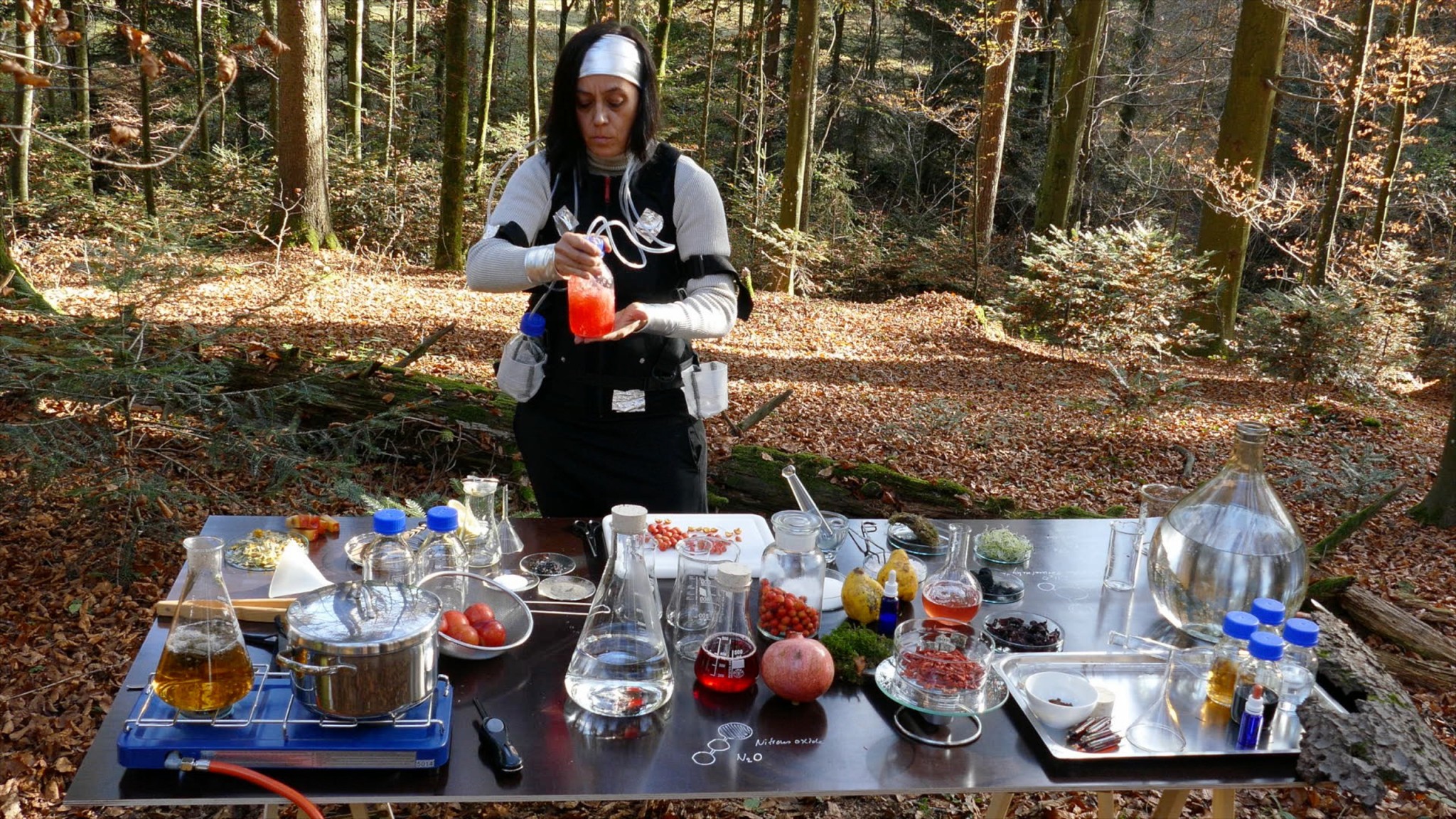 Screening of films by Ben Rivers (Urth) and Ursula Biemann (Twenty One Percent)
With interventions by Jennifer Gabrys (Planetary as Praxis), Adam Searle and Jonathon Turnbull (Anthropause and Resurgent natures).

Entitled Narratives about Earth, the second evening will critically reflect on the role and impact of scientific and technological experiments that underline the dominance and limits of the anthropocene. The works and discussions will also question how science and science fiction interact, in order to analyse how the latter can support the deployment of new scientific knowledge. In addition, we will see how ecological and social upheavals are driving new scientific experiments that are conducive to other models of co-existence with the environment.

The last woman on Earth. Filmed at Biosphere 2 in Arizona, Urth forms a cinematic meditation on ambitious experiments, constructed environments, and visions of the future. Writer Mark von Schlegell contributes a text that can be read as the final log instalments of a woman sealed inside an unforgiving environment. The film considers what an endeavour such as Biosphere 2 might mean today and in the near future, in terms of humankind’s relationship with the natural world.

Since the beginning of the COVID-19 pandemic, Dr Adam Searle and Jonathon Turnbull have been working collaboratively with Professor Jamie Lorimer and Professor Bill Adams on various projects that examine how human-nature relations have been reconfigured during the Anthropause. Beginning with a theoretical exploration of narratives of nature's resurgence in locked-down cities, they have gone on to empirically investigate the role played by digital technologies and online nature groups in facilitating convivial human-nature relations, most notably through an ethnography of the Self-Isolating Bird Club. They have also conducted extensive fieldwork on how people's relationships with local green spaces have been affected by the pandemic.

20:00
Screening of Twenty One Percent by Ursula Biemann, 2016
18 minutes, Colour, Stereo
Courtesy of the artist

In this small pocket of atmospheric chemistry, flying and thinking beings emerge as the result of high oxygen levels in the air which is owed to earth’s forest and plant cover. In the midst of the oxygenic forest, a science-fictional performer manipulates a multitude of ingredients–minerals, forest fruits, liquids and substances–some of which are recognized as potential human foods, others not. Ranging in scale from the cosmos to the kitchen, the video undertakes an empirical inquiry into the capacity of chemical elements.

The video foregrounds the materialities and processes by which human and other organic bodies are kept alive, intensifying the relations to the subtle, multiple, living world. This happens in full awareness of the fact that it is the chemical composition of the universe that constitutes materiality on earth. Tinkering with the chemical composition of the atmosphere is not only impacting the climate on Earth, it directly affects the capacity to think which has originally enabled the conception of technologies that changed planetary chemistry.

Twenty One Percent is a collaboration with Swiss performance artist Mo Diener.

Jennifer Gabrys will give a lecture that addresses the topic of the planetary and outlines “Being Planetary as Praxis”, a concept that informs the ethos of her research group.

Ursula Biemann is an artist, author, and video essayist. Her artistic practice is strongly research-oriented and involves fieldwork in remote locations from Greenland to Amazonia, where she investigates climate change and the ecologies of oil, ice, forests, and water. In her multi-layered videos, the artist interweaves vast cinematic landscapes with documentary footage, SF poetry, and academic findings to narrate a changing planetary reality. Biemann’s pluralistic practice spans a range of media including experimental video, interview, text, performance, photography, cartography, props, and materials, which converge in formalized spatial installations. Recent field trips have taken her to the Amazonian rainforest and the Arctic region where she engages the larger temporalities of climate change with the project Forest Law, Deep Weather, Subatlantic and Acoustic Ocean, amplifying current discussions around ecology, multispecies communication, and videographic worldmaking. The main protagonist in these recent narratives, and particularly in her latest work Forest Mind, is the figure of the indigenous scientist who emerges from a shared history of colonialism and modern science.

Jennifer Gabrys is Chair in Media, Culture and Environment in the Department of Sociology at the University of Cambridge. She leads the Planetary Praxis research group, and is Principal Investigator on the ERC-funded project, Smart Forests: Transforming Environments into Social-Political Technologies. She also leads Citizen Sense and AirKit, which are participatory and practice-based research projects funded by the ERC that address air pollution and citizen engagement. She writes on digital technologies, environments and social life, with recent publications including How to Do Things with Sensors (2019), and Program Earth: Environmental Sensing Technology and the Making of a Computational Planet (2016). Her newest book, Citizens of Worlds: Open-Air Toolkits for Environmental Struggle, is available on Manifold as an open-access publishing experiment. She also co-edits Planetarities, a short-monograph series published through Goldsmiths Press. Her work can be found at planetarypraxis.org and jennifergabrys.net.

Ben Rivers is an artist and experimental filmmaker based in London. His practice as a filmmaker treads a line between documentary and fiction. Often following and filming people who have in some way separated themselves from society, the raw film footage provides Rivers with a starting point for creating oblique narratives imagining alternative existences in marginal worlds. Rivers often employs analogue media and hand develops 16mm film, which shows the evidence of the elements it has been exposed to–the materiality of this medium forming part of the narrative.

Adam Searle is an environmental and cultural geographer whose research examines the relationships between humans, nonhumans, and technologies. His research background is in ecological and environmental sciences, however he became more interested in why
ecologists were asking the questions they were asking rather than the production of scientific knowledge itself. His research spans disciplinary trends in cultural and environmental geography, science and technology studies, and the cognate social sciences and humanities. In 2021, he co-founded the Digital Ecologies research group. His work has been published in Dialogues in Human Geography, Cultural Anthropology, and the Geographical Journal. With Jonathon Turnbull and Bill Adams, he published on the political potentials of digital encounters with digitalised nonhuman life in the Journal of Environmental Media. He has recently been writing about the potentials of filmmaking as a geographical research technique to understand the lives and spaces of animals in the city.

Jonathon Turnbull is a cultural and environmental geographer based at the University of Cambridge. His PhD research concerns the return of nature to the Chernobyl Exclusion Zone in Ukraine, where he has been working for the last two years with scientists studying different aspects of the Zone's ecology, especially dogs and wolves. Jonathon is a co-founder of the Digital Ecologies research group, and also carries out research into bovine geographies, more-than-human filmmaking, COVID-19 and nature, and a range of digitised human-animal relations.